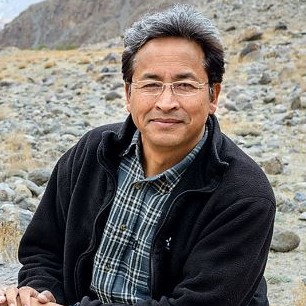 An innovator and educationist hailing from Ladakh, Sonam Wangchuk is a rare example of grit and determination who fought against all odds to make quality education available to the young guns in the valley and contributed significantly to the locals with his innovations in agriculture. He was awarded the Rolex Award for Enterprise 2016 for his work on Ice Stupa Artificial glacier project in Ladakh.

He plans to use the money from the award to build the Himalayan Institute of Alternatives, which will involve young students to solve issues faced by people like education, culture and environment. The real-life inspiration of the character Phunsuk Wangdu from Bollywood blockbuster 3 Idiots, Wangchuk has created a successful model of localised system of elementary education, which has been adopted officially by the Hill Council.